Couronne, or Koronn, is a variant of the board game Carrom. Carrom is believed to originate from India, where it is still prevalent. We have taken quite a liking to this "strike-and-pocket" game here in Unixploria, but with our national twist.

The Friends of Disc Pool (FDP) is a result of our enthusiasm for the game. FDP is the only national organization in the world that promotes this game internationally. We also host the National Unixplorian Championships, as well as maintaining and overseeing rules and regulations.

The variant of the game best known in Unixploria is derived from the United States, where it is sometimes referred to as Disc Pool, a name we have adopted for our Unixplorian version of the game.

The differences between Carrom and Disc Pool are mainly that the Disc Pool board is smaller in size. We also use rings instead of large wooden discs, and we use simple queues to push down the rings or discs in the holes. 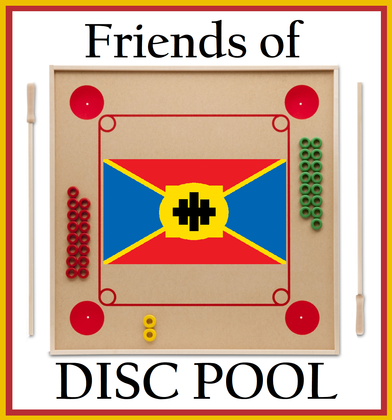 Objective
As in billiards, the goal is to pocket all your discs using a striker disk and a queue.

Preparation and Layout
Put the red and yellow (some boards use green) discs inside the circle in the game board center. Then divide two teams (with 2 or 4 players). Hand out a queue to each team. Then give a black striker (some boards use yellow) disc to each player.

Game Progress
The yellow or green players begin by bouncing their strikers against the disks in the circle's center. You can continue to play as long as you pocket a disc of your color. You can pocket the discs in any corner compartment but only shoot from your side of the board.

You can place the striker where you wish, as long as the disc is placed centered on any of the two lines on your side of the board.

General Rules and Penalties
- When you pocket a disc of your color, you get an extra shot.

- When you pocket a disc of the opponent's color, the game continues with the other team.

- If you accidentally pocket your striker, you have to pick up a disc of your color. Place the disc in the circle on the center of the board. 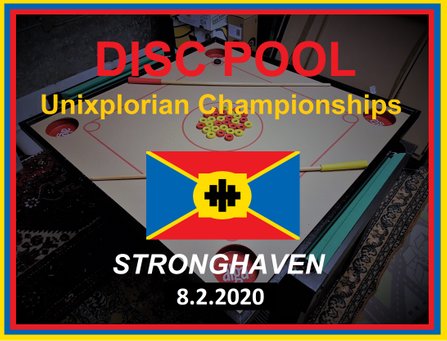