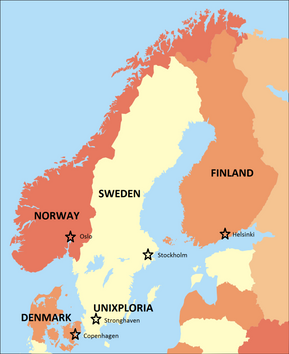 The Kingdom Unixploria is a kingdom located within the borders of southern Sweden with colonial possessions across the globe.

The idea of founding a country began as a game of the mind. Like many other micronationalists, we wanted to entertain the idea of how to go about creating our own country. After this initial phase, we slowly began to form an administration.

Being a nation builder, I sometimes need to ask myself why I persist in making flags, creating anthems, and forming governments?

It does not mean I've rejected my old country. I could not have established this nation unless I was lucky enough to live in a part of the world where fundamental freedom still reigns. Sweden will always be my "home country," nothing can ever change that. However, I have created my realm, my nation, within a nation, without ever taking up arms or raising my voice. The two kingdoms of Sweden and Unixploria live in happy coexistence.

In a way, we all build nations to make things better. We build countries that we wish would exist. Besides, there is no real difference in quantity between macronation and micronation. If we were 300 million people united under one flag, we could undoubtedly claim independence and form a country, then why not do it even if you're just 10, 5, or 1 individual(s)?

You might be inclined to ask: Why start your own country? From the beginning, our intentions and rewards have been centered around the freedom to build a state where my family's values, traditions, and history could come into their own. We did not feel our macro nations offered this and decided to declare our independence.

As for royal lineage, one could argue that all the world's royal families are royal because somebody decided to make them so. Maybe it was due to historical circumstances, possibly because of heroism, and in some cases, even the result of pure coincidence.

The Kingdom of Unixploria is a vision that no earthly nation has yet achieved. We are humbled to be that beacon in a world lacking inspiration and ideas. Just as the elected kings and queens of ancient petty kingdoms are now lost in history, we still believe that what constitutes a great king or queen is not just a question of heritage by blood. It is a legacy of individual honor, blood, and an ethical compass pointing to good deeds.

A micronation certainly has support from various conventions, i.g. The Montevideo Convention, which states that to form your sovereign nation, you must have:

Micronationalism comes in many shapes and forms. Some nations are very serious about appearing like any macro national country, and others start their micronations out of curiosity or as a creative project. Unixploria results from all things mentioned, but this nation is about keeping dreams alive more than anything.

I've read quite a few thoughts on various micronational sites arguing about how many micronations there are in the world. I never understood their debate. 900, 1000, or even 10 000 micronations might seem excessive, but is there an actual list with all the real micronations for us to browse? In all honesty, aren't we all just playing games here?

I can, of course, argue that I run a country just like any other. However, that would be an exaggeration on my part since very few outside our micronational sphere have ever heard of our empires, kingdoms, and republics. That being said, there's nothing wrong with building countries you wish existed for real, but creating a recognized nation with all the trimmings would take more than just a website and a flag.

I think of the Kingdom of Unixploria more like a project, a family within a nation without natural powers outside our realm. Our surrounding macronation (Sweden) could invade us whenever they please; we would be defenseless. They could even take parts of our land and do so with support from their legislation. I could argue that they're violating the Codex Unixploria, but it would not hold up in any court.

As long as we behave, we are free to do as we please. There isn't a single micronation in the world that can claim actual sovereignty. There are a lot of separatist movements in the world, some even form nations, but none of them started by saying, "we are a micronation." I'm not picking on anyone who wants to split from their macro nation. I'm just saying that if you are set on creating a particular country, then you better prepare for complex challenges very shortly.

As micronationalists, we contribute somewhat to that divide, even though we're doing it out of self-preservation. The latter is also my main objective/concern regarding micronationalism. In my darkest moments, I ask myself, "is it worth it all?"; do we need more separatism when our macro nations are tearing apart from ethnic and religious tensions? Are we contributing to the demise of countries and supporting mass anarchy? 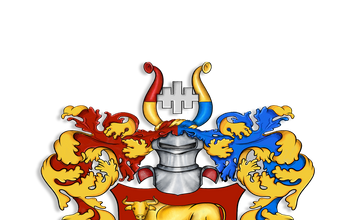 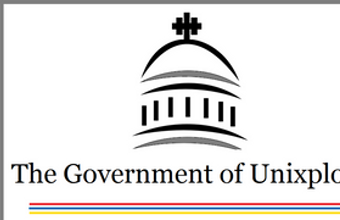 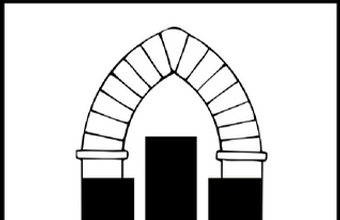 The Royal Court is of great importance to our kingdom. The Royal Family are promoters and good role models for Unixplorian culture, but they also play an important role in political life.

We are a nation of explorers and collectors. What do we mean by that? First of all, we explore the world to understand it better, and we collect artifacts to organize the world according to our minds and hearts.

There is no such thing as a perfect country or an ideal place. I was born in a country. That country is no more. My mom was born in another country. That country is no more. So, I founded my own country, longing for a place to call home. Guess what? Home never changed into something unfamiliar. Home is where I am. It results from all my imagined dreams where heroes are still heroes, and a kiss has no Judas to stain a perfect picture of love.

I live a content life but still long for other sights and other times. Nostalgia is a beautiful thing. Every wish is granted; every sight, scent, and color is vivid and real, perhaps more so than the strange world I keep hearing about on media.

We all long for emotions, countries, ideas, and places rooted in our nostalgic visions: England during the late 1800s, da Vinci’s Florence, or Sweden during the Viking era. Those places and times appeal to me, but they are no longer and perhaps never were. People must have had the same nostalgia back then, longing for places long gone. They are still alive, however. They live in me, creating a defined yet spaceless frame to evaluate my own life. My ancestors speak to me, explaining what course to take.

I live in the best of times, live in the best country, and live in physical surroundings where I feel more content than anyone can imagine. I live a productive life in a clearly defined realm and full of life, but still is no more. I live in Unixploria, my old kingdom, where the echoes from millennia of nostalgia known as the days of yore speak to me and are telling me to be patient. They say the best is yet to come, and I believe them. I have never stopped believing.

Greater Seal of the Royal Family

Lesser Seal of the Royal Family

Coat of Arms of Stronghaven

Independence Day: August 8. With tongue in cheek, we can argue that the Kingdom of Unixploria has been around since our tribe first came to the far reaches of the North, about 5000-7000 years ago, according to genealogical DNA tests. On a more serious note, our nation's name and micronational concept are pretty new. Our micronation was founded on August 8, 2006 A.D. We've been present online since October 15, 2015 A.D.

Economy: We have a mixed (green) economy, a system blending market economy with state interventionism elements.

We do believe in a free market, but not at any cost. Regulation is needed to prevent oligarchical tendencies and environmental legislation to protect nature and natural resources.

Religion: Our culture, legislation, and traditions are influenced by Christian culture and tradition. Our Kingdom has undergone several religious shifts through the ages but has been a Christian nation for 1200 years. The Church of Unixploria is our state church, but we welcome all willing seekers.

Area: 0,001307 km² in Unixploria Proper. The Unixplorian Empire has possessions on all continents. The Kingdom also has 22 colonial provinces across the globe.

The short answer would be 'yes,' but it is difficult to explain what a tribal nation looks like today.

A generally accepted definition of a tribe is a social group (often, but not necessarily, with shared culture and ethnicity) outside of or before developing states.

The Kingdom of Unixploria is like a large family, a relatively tight group of members joined by blood or culture.

Our nation is young, but our historical record is ancient, although we have been oppressed and unwillingly divided by different rulers and forced to wave other flags through the ages.

Unixploria brings all that division and tyranny to an end. We are no longer part of any forced national identity. We are a tribal kingdom united by soil, blood, and pride. We are family; we are the proud inheritors of cultures and traditions once divided, joined together as the Kingdom of Unixploria.